Actually, this is nothing new. The “Color of the Year” typically is two colors because the two, important color-forecasting groups usually predict different colors. Sometimes their colors are similar, but most of the time, like this year, they choose different colors for the same reasons. Confusing? Yes.


Both groups – the Color Marketing Group (CMG) and the Pantone Color Institute – forecast their colors of the year, as well as multiple color palettes, based on a slew of factors: the colors being used by high-end designers; color influences in media, music, art and digital design; current and predicted social, economic and cultural forces in America and abroad.


Pantone sends its employees out to research the world in pursuit of colors while CMG holds semi-annual conferences for their members, who are color designers. The end results of the CMG conferences are their color trend forecasts.


Not surprisingly, the economy has played a big role in color forecasting for several years. Both groups have chosen bright colors to foster optimism in trying times. Environmentalism also has been a factor in both group’s palette predictions, off and on since at least the mid-2000s.

Pantone’s 2012 Color of the Year is “Tangerine Tango.” 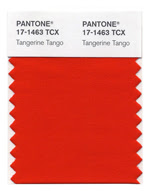 Pantone chose this year’s color, as they did last year’s color, to perk us up in the face of our continuing economic woes although they don’t say it quite that way: “The 2011 color of the year, PANTONE 18-2120 Honeysuckle, encouraged us to face everyday troubles with verve and vigor. Tangerine Tango, a spirited reddish orange, continues to provide the energy boost we need to recharge and move forward.” 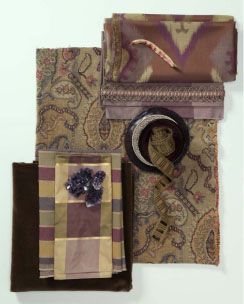 Boyz-n-Berry is already turning up in fashion. Here’s Sasha Obama sporting Pantone’s Color of the Year in the presidential family portrait. Her dad’s tie looks like a paler version of Boyz-n-Berry, too. 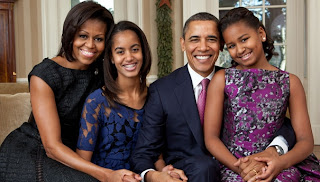 CMG describes their reddish purple as an optimistic color that will foster health in people. They also have something darker to say about Boyz-n-Berry in relation to other colors: “Simply, with black it (Boyz-n-Berry) is warm and darkly evocative, offering richness and depth, even if it takes us to the dark side of the imagination with vampires and the cosmic black hole. When paired with white, Boyz-n-Berry plays well with ermine furs of royalty, with stark white sand beaches, and the brightness of the bright lights.”


I just hope that color-forecasting groups are not getting into predicting vampire trends.
Posted by Pamela Portwood at 2:53 PM

Pamela Portwood
Pamela Portwood is a writer and an advocate for healthy and sustainable homes and communities. For eight years, her interior design firm Greener Lives LLC provided her clients with beautiful, stylish homes that also fostered the health and well being of both people and the environment. That is what all homes and buildings can and should do. Her interior design work is featured in the book "LEEDing the Way - Domestic Architecture for the Future: LEED Certified, Green, Passive & Natural."